Joy was born in Nashville, Tenn., and grew up an only child and a pastor’s kid. She earned a BA in Journalism from Anderson University (AU) in 1997, and though she felt a prompting toward ministry in her early years, it wasn’t until an impactful message at North American Convention delivered by Rev. Jeannette Flynn that she accepted the call to ministry in June 2000. Joy then attended the Anderson University School of Theology, graduating with a Master of Theological Studies degree in 2003.
Joy met her husband Steve the summer of 2001 while she was in seminary. They were married in Park Place Church of God in Anderson, Ind. in December 2002. Steve holds a bachelor’s degree in Christian Education (with emphasis in Youth) from Mount Vernon Nazarene University, and worked for many years with youth and young adults. He held an associate pastor position at Maiden Lane Church of God for two years as Pastor of Young Adults. He also served as a data analyst for Marriage Resource Center (MRC) of the Miami Valley for 5 years, and still uses his teaching gifts and skills to help couples and individuals build stronger, healthier relationships and life skills.
The Shermans moved to Springfield, Ohio in October 2003, when they both came on staff at Maiden Lane. Joy served as an associate there until November 2014, when she took a position as Director of Mentor Services for MRC and teamed with her husband to lead marriage education classes and marriage mentoring. She was there for a year, and in February 2016, Joy joined the staff at Meadow Park Church of God in Columbus, Ohio, as the interim Senior Pastor. In August 2017, Joy was called as Lead Pastor of Community Church of God in Mt. Carmel, Illinois.
Steve and Joy’s son, Elijah, was born November 2005. He loves math, science and reading. He plays piano and trombone, and loves to sing. He’s now a proud member of the Marching Jr. Aces in Mt. Carmel. The Shermans love family game nights and movie nights, hiking, disc golf, playing in mountain streams, watching football and playing with their three dogs, Janie, Moxie and Josh.
Joy has a deep love for God’s Word, for building relationships with people and doing life together, for helping others share their God story, and for helping the church be the hands and feet of Christ in their community. She and Steve care about ministry to the whole family, and they are burdened for the church to “be the body” in the world.

Chris has been involved with Student Ministry at Community in some way, shape, or form since 2002.  Chris started as paid staff at Community in the fall of 2008 as a Bi-Vocational Minister, and in the fall of 2013 as a full time Associate Pastor and Student Ministries Pastor. Chris can often be seen at local sporting events, MCHS Theatre productions and musicals, and just about anything else a Wabash County youth can be involved in.  He greatly enjoys time with friends and family, along with a deep passion for working with the youth of Wabash County and reaching out to them, just as his Youth Ministers did for him.  The Community Church of God has been instrumental to Chris and his family through the kindness shown to him as a youth and the love he has felt from the people.  This relationship has led to the majority of his extended Wabash County family attending church with him.  Chris says “many of them might not be here, if not for the love shown to me as a youth.”  He started his own family back in 2005 with his wife Jennifer and their three boys, big brother Andrew, and twin brothers Caden, and Carsen. Chris and his family love the fact that they were able to stay in Wabash County near family and friends and this has been a wonderful blessing. 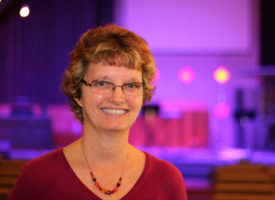 Jackie has been the Administrative Assistant with the Community family for the past 18 plus years. She can honestly say that she loves coming to work and has a close relationship with those she works with. She has had the opportunity to work with multiple pastors and youth leaders. She lives in rural Wabash County on 30 acres with her husband, Leon. She enjoys baking almost every day, planting a garden in spring, canning salsa and homemade mustard sauce from the hot peppers she grows, and picking blackberries from her patch. Jackie is a member at Lick Prairie Christian Church where she helps lead worship. One of her joys in life is singing. She appreciates seeing God’s beautiful creations that He has made, especially from the back of a motorcycle. She and Leon have been blessed with the opportunity of raising three children. She gives God, her Church families, and friends the glory for their support during the loss of her son, Phillip in 2013 – realizing that with God all things are truly possible! Jackie’s grandchildren, Guinness, Luca, Zane, Evey, and Rex are the lights of her life. 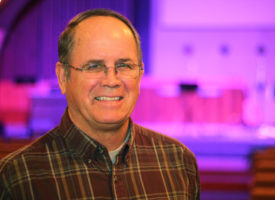 Les would say that his life has been very rewarding. It began with two Godly parents who taught him to love the Lord and put Him first in every decision. His life has revolved around several families. First is his immediate family of wife Pat, along with children Zed, Julie and Josh, that has brought him so much happiness. That family has continued to expand with son-in-law Mike, and grandchildren Jaden, Madi, and Carli, as well as daughter-in-law Amber and grandchildren Zeme and Zedrick. Watching them growing up into what God has planned is special for Les. Thirty three years of teaching thousands of elementary and middle school students was also wonderful and coaching was a special part of these years. Les enjoys the bond that remains with many of his former students and players, many of which are a part of Community. He considers the Church another family, and feels so blessed to worship with them all. Les hopes God continues to use Community Church of God for great things yet to come. He truly believes God’s hand can be seen in all the aspects of our lives.

Raising three children on the 130 year old family farm along with his wife Beth is one of the more fulfilling parts of Terry’s life. “I like to think that the important part of life revolves around the family. Nuclear, extended, church, community; the people we have influence with are the souls God has intended for us to touch.” He thoroughly enjoys his service to the church, as well as his volunteer work in Wabash County which including co-chairing the annual Christmas parade, his personal favorite. At, as he says, his advanced age, watching sports is now more practical than participating. He considers the baseball Cardinals, Packers, Celtics, Blues and MCHS Golden Aces “his teams”. 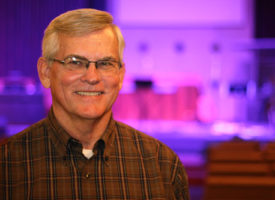 Larry has been attending Community Church of God for over 40 years. Currently serving on the Board of Elders, he also leads small group on Sunday evening.  Larry, along with wife Linda, have raised four children. All four are married and have made the Whitakers proud grandparents seven times over.  Both Larry and Linda are retired school teachers and love to travel, especially when it means visiting their grandchildren.

Don Price is lovingly known as the “elder Elder”. He has been attending the Church of God in Mount Carmel, since 1970. Don is responsible for the preparation and maintenance of the baptistery. Along with his baptismal duties, Don is also the moderator of the Tuesday Morning Men’s Prayer Group.

picture and bio soon to come